Plot Synopsis: (via IMDB)
In the wake of a disaster that changed the world, the growing and genetically evolving apes find themselves at a critical point with the human race. 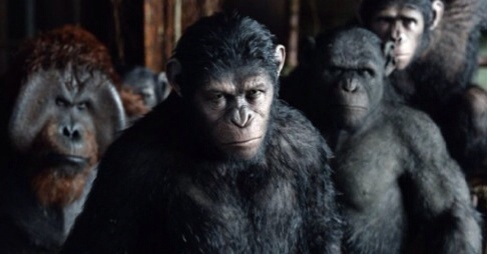 I’m sure everyone has reviewed this by now so I’ll just say this: Dawn Of The Planet Of The Apes is pretty damn spectacular. It isn’t perfect but any issues I have with it are pretty insignificant compared to the amazing special effects. WOW! Hey you WordPress whippersnappers – remember that I’m old. You’re all used to movies looking like this now & just expect it all the time. You’re spoiled!!! 😉 I mean, I’m actually still impressed by 1968’s Planet Of The Apes so, you know, maybe I’m more easy to please than some of you. But this film is REALLY freaking impressive. 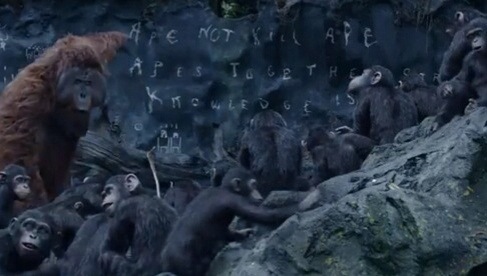 The apes!!! I’d happily watch a movie with just the apes & no human actors on screen. There was so much depth to their characters. The only downside is that they did such an excellent job with the look and the character development of the apes that the humans in the film really do pale by comparison. It was actually easier to feel for the apes and their struggle than it was for the humans and all that they’ve gone through. However, (and this is something I loved about this film), there’s no black & white “humans are evil and the apes are innocent” (or vice versa). We see both sides and I thought the story worked really well & that the way things progressed was very believable. I was completely immersed in this film and that doesn’t happen as often as I’d like considering how many movies I go to. 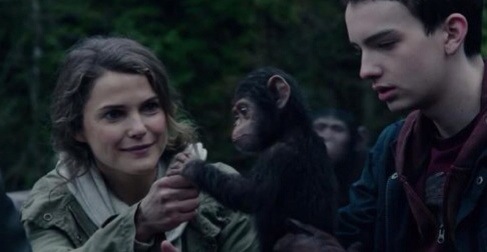 I don’t know what else to say that hasn’t been said by others. I thought Rise Of The Planet Of The Apes was pretty great and I love that Dawn manages to improve on it. Also, I’ll fully admit that I love that this movie turns into a full-on blockbuster at the end. This movie is proof that you CAN have an exciting, heart-pounding blockbuster as well as an intelligent script and well developed characters that you actually care about. I do wish the human characters had had as much time spent on making us care about them as the apes had but it’s really a minor complaint. This movie is very very good.

I STILL haven’t made my mind up on if Dawn Of The Planet Of The Apes is my 2nd or 3rd favorite movie of 2014. It’s between this & Her. See my full list HERE if you’re bothered. 🙂