Plot Synopsis: (via Wikipedia)
The film tells the story of a former boy genius (Clooney) and a young girl (Robertson), who travel to an ambiguous dimension known as “Tomorrowland”, where their actions directly affect the world and themselves.

Damn. Damn! Damn damn damn! Tomorrowland was one of my most anticipated movies this year. In fact, it’s the one I chose over everything else (even Star Wars!) when Luke over at Oracle Of Film asked the question: “What is your most anticipated movie?”. Damn. Is it too late to change my answer?? What a disappointment.

I desperately wanted to like this movie. It seemed to have everything going for it: Live action Disney sci-fi directed by Brad Bird! Everyone loves Bird’s Ratatouille and of course The Incredibles but my own personal favorite of his is The Iron Giant and I think I was hoping that Tomorrowland would have the heart that that one does. Unfortunately, Tomorrowland feels very cold & sterile and most of the characters, other than teenager Casey played by Britt Robertson, aren’t very likeable. In fact, George Clooney’s character is so grumpy & unlikeable at first that I wasn’t able to warm to him at all, especially after he knocks Casey off his front porch in a way that could’ve broken her damn neck. They explore his past to show us that he was once an optimistic “dreamer” but don’t really explain why all that changed. We’re given hints but not enough to make us care. 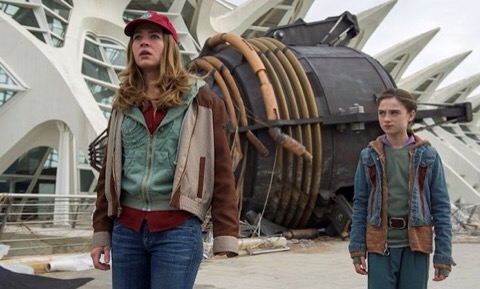 I don’t know if this is SPOILER TERRITORY so look away for the rest of this paragraph if you still want to see this movie. A lot of the rather convoluted story revolves around an android girl and she’s almost as unlikeable as Clooney’s character. This movie reminded me in a lot of ways of A.I. Artificial Intelligence, which also felt very cold & sterile and was a bit convoluted and unsure of its message. However, Haley Joel Osment was at least very good as the “robot boy” and you cared about his character. It IS possible to make us like “robot people”! Loads of movies have managed it. Heck, even D.A.R.Y.L. managed it! (Yes! I got another D.A.R.Y.L. mention into one of my reviews!). But in Tomorrowland, I didn’t care at all about this little android girl and her world so I didn’t really care if Clooney’s & Robertson’s characters would be able to save it or not. I should point out, though, that I don’t think any of this was the fault of the actress (Raffey Cassidy) as I think she was very good in a poorly written role. Oh! By the way – Hugh Laurie is in this too in a rather stupid & pointless role. He’s really not even worth mentioning. Although I guess I just did…

I’ll mention that there’s quite a bit of violence against the androids, which may disturb young kids as the androids look completely human and the very young may not understand that they’re just robots. This includes one sudden & shocking Final Destination/Meet Joe Black moment that felt out of place in a Disney film.

I’ll say that the one thing I did like about this was Britt Robertson. I know I watched this silly show that she was on for a while (The Secret Circle) and she was the one thing that really stood out. I’m not surprised that it seems she may be on her way to bigger roles now and, although she’s 25, she has a very young look which means she can play a teenager in something like this without it being embarrassing like Olivia Newton John in Grease. Her character helps save Tomorrowland from being a total disaster, at least.

Tomorrowland has a convoluted plot set in a cold & sterile environment where everyone (besides the main teenage girl) is unlikeable and the audience won’t be able to buy into them or care about their fate. Its story is far too complicated for young kids plus the level of violence was a bit surprising for a Disney “family film”. It’s hard to figure out who this movie is aimed at as the confusing story won’t make any kids like it (even I was confused by the end as to what exactly was going on) and there’s not enough here for adults to enjoy either. I can’t see this being a movie that most homes with kids will own and that will get played over & over again, which is unusual for a Disney film. I know it’s very unlikely that I’ll ever see it again (and I have no desire to) and I highly doubt my kid will ever ask to watch it over and over again like Frozen or most of the Pixar films. The movie’s message gets lost in the confusing plot but, basically, it’s saying that we should all be “dreamers” and full of hope. It’s unfortunate that Tomorrowland can’t achieve what it clearly wants to as it isn’t going to actually inspire anyone. I’ll say the final scene & image are pretty good & is the closest the movie comes to achieving its vision but it doesn’t come even close to making up for the previous two hours of the film. I’m very disappointed but it won’t make me give up on Brad Bird as I think he’s very talented and hopefully has another The Iron Giant in him. I blame Damon Lindelof.