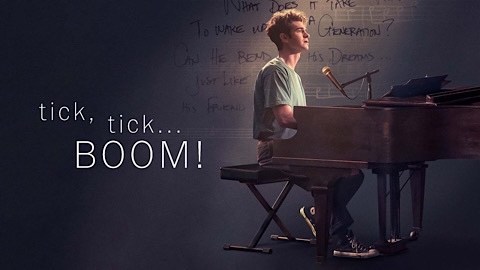 Based on Tick, Tick… Boom! by Jonathan Larson

Plot Synopsis: (via IMDb)
On the cusp of his 30th birthday, a promising young theater composer navigates love, friendship and the pressures of life as an artist in New York City.

I’ll be honest – I read about this movie and wasn’t going to bother even watching it as it’s just really not my sort of thing. I do like “theatre” but have seen very little of it (I’m not made of money! And going into London stresses me out). I’d like to see more but my knowledge on theatre shows is very limited. I know pretty much nothing about Rent other than I think it’s what they spoofed in Team America? So that’s the type of person I am watching this movie about the guy who created Rent.

I have to say this started out really slow but, by the end, I really enjoyed it and thought this guy (Jonathan Larson) had a very interesting life. I loved his passion for what he did and am sad that things ended up as they did. Obviously, I had no knowledge of Larson before seeing this movie. I am assuming that theatre people enjoyed this one as I think the film really captures that lifestyle (or what I assume that lifestyle is like – I could be wrong!). As the film was directed by Lin-Manuel Miranda, I’m sure he captured the theatre lifestyle. I thought Andrew Garfield was very good but I can’t say if he has done Larson well or not? So hopefully those who knew him are happy with the film. Oh, and I did like the diner number and am pretty sure it had a lot of big theatre names in it so I’m sure fans loved it. But I’ll admit that I only recognised a few faces, mainly the women from Cheers & Life Goes On as I know more about TV than theatre!

Larson’s friends in this were really great characters as well. I especially liked Alexandra Shipp as his girlfriend & Robin de Jesus as his best friend. And Vanessa Hudgens was good as one of those performing his songs. Judith Light (Who’s The Boss!) was very entertaining in a small role as Larson’s agent. Finally, Bradley Whitford played Stephen Sondheim, who inspired & encouraged Larson. R.I.P. Stephen Sondheim, who passed away over the weekend. Hopefully Whitford did him justice. I thought both Whitford & Garfield were very good in this. As I said above, hopefully those who knew them are pleased with this film.

So, as a non-theatre person, I enjoyed the story in this film. It was told through showing Larson performing his musical tick, tick… BOOM! (I believe?), which is about his life and fear of turning 30 & time running out. Then, as he tells his story through that musical, you get to see him put together his first show (Superbia) and get to watch the actors perform those songs before a small audience (I think this was to determine if it would be made into a Broadway show?). It sadly wasn’t but, hey – it’s now in a movie! And I thought those songs were pretty catchy and think I’d rather watch Superbia than the tick, tick… BOOM! one. So it was great how they told his story in a straightforward movie kind of way while also showing the audience a lot of his work in two of his musicals. I thought it worked really well telling his story this way & am glad I decided to give the film a chance. And I’ve just now also decided to up my rating half a point.