**Welcome to Horror Comedy Week on Cinema Parrot Disco! I actually got my shit together enough to have an actual theme this week! Okay, it wasn’t originally my plan but I realized that I’d watched enough horror comedies to have a themed week. Yay!** 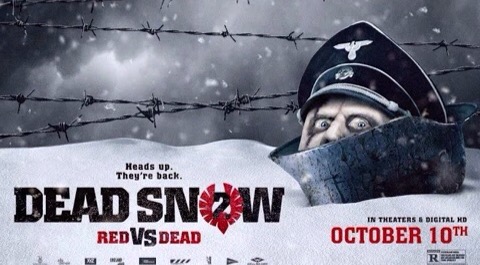 Plot Synopsis: (via IMDB)
Still on the run from a group of Nazi zombies, a man seeks the aid of a group of American zombie enthusiasts, and discovers new techniques for fighting the zombies.

I really liked the first Dead Snow (I reviewed it HERE). I mean, it’s full of Norwegians and NAZI ZOMBIES for crying out loud. That’s so awesomely crazy. Then the second film came out and all I heard was that it was absolutely hilarious and even better than the first one so I of course had to check it out. I actually bought both of these on DVD. Does anyone do that anymore? I buy hardly any these days – I miss physical copies of movies! And I miss physical copies of music even more. *sigh* I miss the old days… Tangent over! The first Dead Snow is far better than the sequel. Sorry sequel lovers! Dead Snow 2 definitely ups the comedy BIG TIME and I did get some laughs out of it but it goes so far overboard that, as a film, it pales in comparison to the originality and the subtle dark humor of the first film. Plus, where’s the fucking SNOW in this one?!

(See? I was so proud of my foreign DVD haul when I picked up Dead Snow that I tweeted this photo in March 2014. That’s probably the last time I bought so many at once.)

I’m not going to say that you shouldn’t watch this one if you liked the first one. It’s definitely worth checking out if you did but be aware that it’s a very different film. As this is a sequel, there will be slight spoilers for the first film (but I’ll still try to avoid spoiling things too much as I really want any zom-com lovers to watch the first film). Anyway, when you fall behind on horror movies you can’t help but know who survives the previous film when they’re clearly in the sequel, so… The survivor from the first film is our hero in this one and I like him so was happy to have that link to the first film.

He’s the best thing about the sequel (along with that other guy in the picture, who was a fun new addition) and, without him, I’d have enjoyed this movie far less. He’s the only true link here due to there not only being NO SNOW in this one but, also, our main Nazi zombie from the first movie is so completely different in this one. In Dead Snow 2, the Nazi zombies aren’t really threatening or scary – they’re just silly. Well, the whole movie is just plain silly.

Silly! That’s really the best way to describe the comedy in the sequel and, while I’m certainly not above “silly” (I still crack up at the silliest knock knock jokes), I just usually prefer my comedy to be a little more subtle and less over-the-top. Which is “funny” as I remember my main complaint about the first film was that it wasn’t funny enough. Maybe there’s just no satisfying me! 😉 Well, I take back that original complaint as this movie took it a little too far. Maybe Dead Snow 3 can find the perfect comedic balance! I’d still watch a third film as I really did enjoy both of these films despite my complaints.

Yes, I did enjoy this one despite my negative-sounding review! I just can’t help but compare it to the first film… Sorry! I can see why some people like this one more – I guess it just depends on what type of movie you prefer. Plus, I really hated the “American zombie enthusiasts” who help our hero fight the Nazi zombies. I found them annoying and completely unfunny (even the Star Wars nerd-girl!). They’re the worst example in this of “trying too hard” whereas the horror-movie-loving-nerd from the first movie was a lot of fun and a really likeable character. Plus, the back & forth language thing between Norwegian & English once the Americans arrived was actually very distracting (and confusing, in a way, as I didn’t immediately realize that I was no longer reading subtitles! Odd).

I’m going to wrap this up as I’m sounding negative again & I don’t want to be that way as I would definitely recommend both of these movies to horror comedy lovers (especially zom-com lovers). Despite some annoying new characters, there are quite a few funny moments and I did laugh out loud a few times (like with that kid in the hospital room. Funny!). I just prefer the characters and the “spirit” of the first film (and the fact that there’s actually SNOW in the movie, which is pretty damn important, yeah? Blood-splattered snow & all that? It’s a big selling point! There’s snow on the damn poster for this so at least the poster-maker realized its aesthetic importance).

I’ve realized while writing this what it is about this movie compared to the first one and I really shouldn’t make this comparison as my knowledge is limited on the movies I’m about to mention, but… Here I go anyway! When I was about 18, I rented The Evil Dead and Evil Dead II and wasn’t really the biggest fan of them so I’ve not watched them since (although I do appreciate their importance). So, I don’t remember them well but I do remember preferring the first one while the second one went all silly, right? That’s exactly the same with Dead Snow & Dead Snow 2 so, thinking about it, it makes perfect sense as the Snow films both owe a lot to and reference great classic horror movies, especially the Dead films (without giving away too much, the Evil Dead II arm thing plays an important part in Dead Snow 2). Holy shit – these are clearly an homage to the Evil Dead films and I only fully realized that while writing this review. I’m such an idiot! Ignore everything I said before this paragraph! 😉 If you’re a fan of the Evil Dead films, you’ll love the Dead Snow films too! Huh. Well, damn… I guess Dead Snow 3: Nazi Zombie Army Of Snowless Darkness comes next. I’ll watch that but I’ll still always like the first one the most. 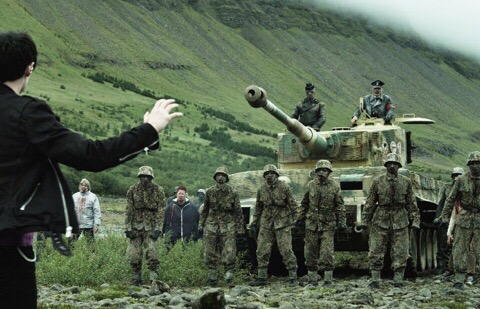 Plot Synopsis: (via Wikipedia)
Dead Snow is a 2009 Norwegian zombie splatter film that centers on a group of students surviving a Nazi zombie attack in the mountains of Norway.

This is my second favorite Norwegian movie of all-time after Troll Hunter! (Okay – they’re the only Norwegian movies I’ve seen). This is also the third zombie comedy I’m reviewing for my month of horror movie reviews (that I totally flaked out on and stopped posting for a week). I liked Dead Snow much more than Life After Beth but, while I didn’t enjoy it nearly as much The Return Of The Living Dead, I did like it and thought it showed a lot of promise. I’ve heard some pretty positive things about the sequel and am not surprised as I thought this was a great concept that didn’t quite work overall but could possibly be improved upon in a sequel. I’ll have to check that out at some point.

What does work is, as I said, the concept. Nazi zombies! Why did no one think to do that sooner? Or HAS it been done before? Not that I can think of. A lot of reviews have also mentioned the look of the blood on all that white snow and it did make for a great look to the film. Also, the characters are decent. At least, as far as horror movie characters go, a few of them are fairly well developed. There’s a great “movie nerd” guy who keeps talking about & quoting movies throughout the film so that was fun for a geek like me. And guess what? Slight spoiler, but… He’s the one who gets laid! So there may still be hope for movie geeks (maybe even Mike?). 😉

I think what didn’t work quite as well as I’d been hoping was the comedy. The movie takes itself slightly more seriously than I was expecting and a couple scenes felt a little too dramatic for a comedy. The pacing was a little off as well as it seemed too slow at first then suddenly gets pretty mental at the end. These aren’t huge complaints, though, as I still thought it was pretty good. I think I’m just trying to figure out why I didn’t like it QUITE as much as I should have as it’s my type of thing and all the elements are there for it to potentially be great. I think they could have upped the comedy more and been a little more silly and made it a bit more “fun”. It sounds like this may be the case in the sequel?

If you’re looking for comedy horror, I’d recommend Tucker & Dale Vs Evil or Grabbers instead as they were just loads of fun. If you specifically like zombie movies, though, I think you’d be perfectly happy with this as a zombie comedy as well as just a zombie movie. The gore gets fairly excessive at the end so that should keep zombie fans happy. It’s not as funny as The Return Of The Living Dead but there were a few unexpected laughs and the characters are more well developed and likable than a lot of horror movie characters manage to be. The movie doesn’t quite reach its potential but it’s still a pretty good effort. However, I can’t believe that girl sucked that guy’s finger just after he’d done a poo & wiped himself and hadn’t yet washed his hands!!!!! That’s just nasty.