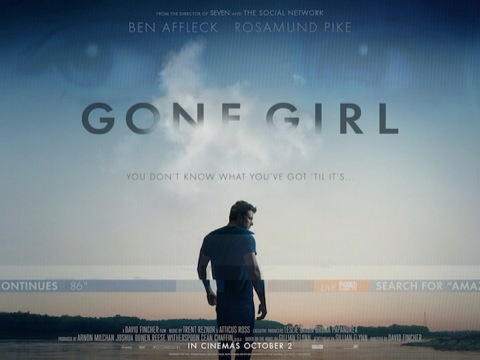 Based on Gone Girl by Gillian Flynn

Plot Synopsis: (via IMDB)
With his wife’s disappearance having become the focus of an intense media circus, a man sees the spotlight turned on him when it’s suspected that he may not be innocent.

Yes, I’ve read Gone Girl by Gillian Flynn (you can read my review of the book HERE – also spoiler-free). I really will keep this short as it’s a hard movie to discuss without spoilers and, for those who haven’t read the book, I hate the thought of anyone spoiling the story for you. It’s a GREAT story and it’s what I loved the most about the book. I’ll say now that, if you’ve read the book, I don’t think you’ll be disappointed with the film. If you haven’t read the book, I think you’ll enjoy the film even more as you’ll be getting to watch the story unfold without any knowledge of what’s going to happen next. You’ll be getting to experience the same feeling I had reading the book, which I read very quickly as I couldn’t wait to find out what would happen next.

I had my doubts about Ben Affleck being in this as he wasn’t at all what I pictured and seemed a bit too old. Well, you know what? He’s great in this! I was happier with Rosamund Pike being cast as she did fit my picture of the character. She’s absolutely amazing as Amy! I’m very happy with all the performances but especially Affleck, Pike, and Kim Dickens who does a fantastic job playing the main detective. Carrie Coon is also good as Affleck’s twin sister but her character felt a little less explored than in the book where she was one of my favorite characters.

As far as movie adaptations of books go, I’m happy to say they’ve done an excellent job with this one. As always, things had to be left out to keep the running time down but I don’t think it was anything that hurt the story in any way. You of course aren’t going to get quite as much character development as you will in a book but they came very close to achieving as much as possible, especially with the main and most important characters. I’d have liked to see more of Rosamund Pike as I didn’t feel they captured her character as well as in the book (through no fault of Pike’s, though – again, this will just be down to time restraints). 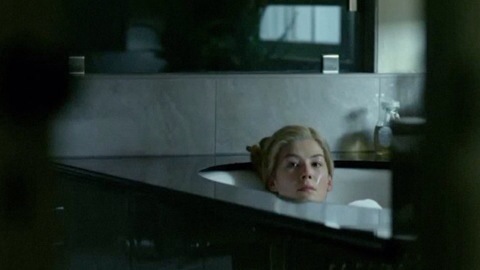 This movie is very good. I don’t think many people will find it better than Fincher’s Fight Club or Seven but I think it comes fairly close in some ways. I know some people have been a little disappointed with his more recent efforts but I can’t see many people coming out of Gone Girl and saying they didn’t at least enjoy the story and the performances. In a way, I’m jealous of those who get to watch this without having read the book as I never enjoy a film as much if I’ve read the book (especially this sort of genre) as it loses its impact when you know the outcome. I’m very happy with the adaptation, though. Seriously – I have no complaints there and think they’ve done a pretty damn good job achieving all they did in 149 minutes as it’s a very complex story and set of characters. Well done to all involved! I definitely recommend this one and, if you’ve not read the book, I’d almost say to watch the movie first and then read the book to further flesh out the characters. This is probably the first time I’d EVER say to do things in that order! I just think you’ll have a great time with this movie if you go into it knowing as little as possible.