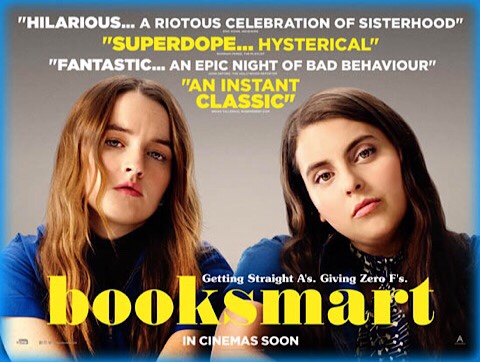 Plot Synopsis: (via Wikipedia)
Booksmart stars Beanie Feldstein and Kaitlyn Dever as two graduating high school girls who set out to finally break the rules and party on their last day of classes. 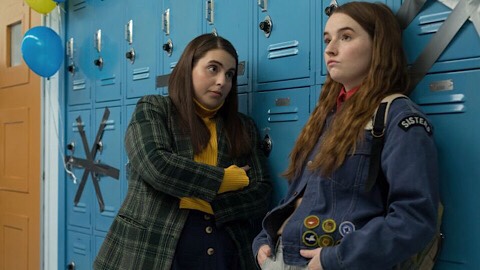 I was really looking forward to this movie after the huge amount of hype on Film Twitter. And even though I’m WAY beyond my teenage years, I’ll always love a good teen movie. Of course I will; I grew up on John Hughes! I think there have been some very good coming of age movies in recent years, which will probably forever be a favorite sub genre of mine thanks to Stand By Me being a favorite film from my own teen years. But I do tend to prefer the more serious teen films, such as The Edge Of Seventeen & The Perks Of Being A Wallflower, to the full-on comedies such as Booksmart. Maybe that’s why I found this movie slightly disappointing? I don’t know. I’m not a huge fan of straightforward comedies. This movie really just is the female version of Superbad, which I found quite average and only occasionally funny. I do think Booksmart is the better film, but only slightly. Weird that Jonah Hill’s sister, Beanie Feldstein, is in what I see as the female version of his movie… 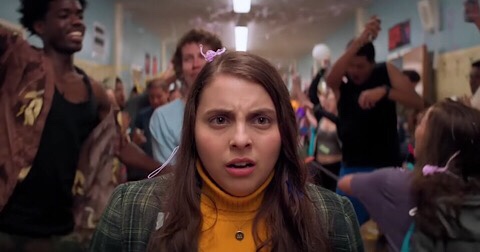 Do I dare bring this up or will I get in trouble? Screw it – I’m female. I think, as there’s such a push for female directors now, some of their movies are getting overhyped. Guess what? One woman directed AND wrote The Edge Of Seventeen, which is a much better film. Why was nothing said of that? Because, just a few years ago when that came out, everyone wasn’t so focused on being so damn outraged over everything. You know what else is a much better and far funnier film than Booksmart? Clueless. Waaaay back in the dark ages of 1995 yet also directed and written by just one woman. Know what else is a fantastic film and female as f*^k? Waitress (2007), directed and written by the lovely Adrienne Shelly. If she was alive & that film had come out now, it would be up for some damn Oscars. So, yeah, female-led films are being overhyped now as they were so often unfairly dismissed in the past. I get it. I do. But Booksmart is just… Okay. 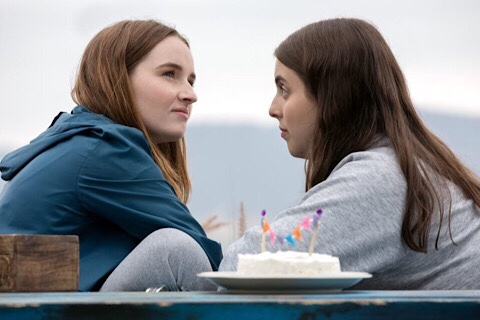 I promise I’ll shut up in a minute. I’m not going to get into a big discussion on female directors or how much I f*^king love Wayne’s World & Point Break. I’m really happy that women do finally seem to be getting more opportunities to direct now and I know I’ll absolutely love some of their films and may be able to relate to them more. I just wish that they’d been given more recognition in the past because there have been better films than Lady Bird made by women over the years (good but not Best Picture material – Hell, The Edge Of Seventeen was better). So. Booksmart is fun and I did laugh at times but it’s no better (and no worse) than similar films made by men such as Judd Apatow. If you like the Seth Rogen-type comedies but not Booksmart (and vice versa), that makes no sense and you probably ARE sexist. Because it’s the exact same type of movie. Whatever. I’m just sick of people getting hung up on who directs or stars in a movie. Who cares? I just like good characters & writing. I want to be entertained. *Rant over* 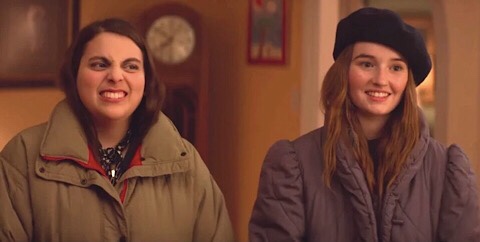 Should I actually talk about the movie?! Sorry! I do go off on one sometimes. I won’t once again get started on female-starring comedies always getting far lower ratings than male-starring comedies so I admit that sexism clearly does sadly still exist, especially when it comes to comedy for some strange reason. I don’t personally like either film AT ALL but there’s no f*^king WAY that The Hangover deserves a higher IMDb rating than Bridesmaids. I swear people get a little weird about women daring to be raunchy too. I like raunchy women, dammit, and I like that Booksmart manages to be raunchy but intelligent & realistic about it. Maybe that’s why it’s being more readily accepted? I’m not comparing it to Bridesmaids – it’s definitely a much better film. I don’t like “shock” comedy and Booksmart is more the kind of humor that I go for. 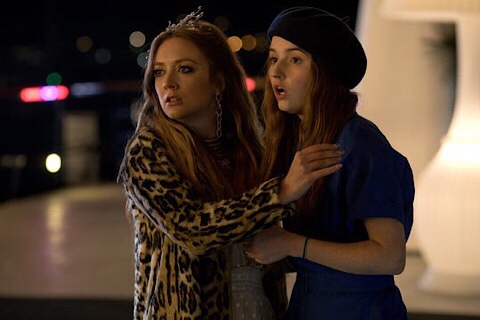 I think the problem is that some of its humor doesn’t work at all. I liked the two main characters just fine but thought all the other characters were very weak. The “doll part”, while a favorite scene for some, didn’t work for me. It’s the kind of dumb scene that modern teens would bitch about in an Eighties movie such as Better Off Dead. We were making dumb scenes like that before today’s teenagers were born! And, as much as I hate to say it as I adore Carrie Fisher, I thought Billie Lourd’s character was ridiculous. I’m not saying it’s her fault – I just didn’t like the character. Never mind that she’s clearly ten years older than any high school student I’ve ever seen but, okay, I know this has always been a thing in “teen” movies all the way back to Grease. I was just confused as I honestly didn’t realize she was a fellow student at first. As I said, though, I liked the two main characters just fine and thought that Kaitlyn Dever & Beanie Feldstein were funny and very believable as best friends. They’re what made the movie better overall. I truly did want to love this but I’m always very picky when it comes to comedy. I enjoyed it but, admittedly, I’m getting further & further away from being the target audience for a teen film. I’m glad that teenagers do seem to be loving it and fully understand why. It’s a good teen comedy. I even admit that it’s a far better film than some of the very dodgy teen movies I liked in the Eighties. But it’s certainly no Stand By Me. Or even Better Off Dead… 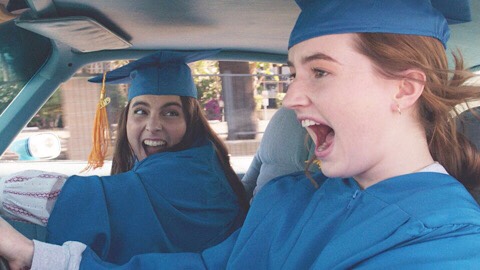 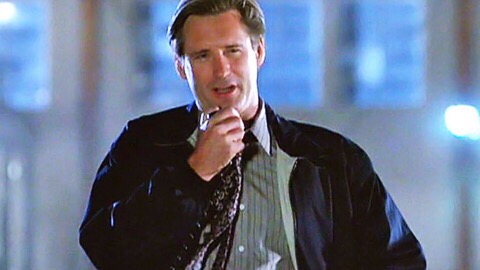 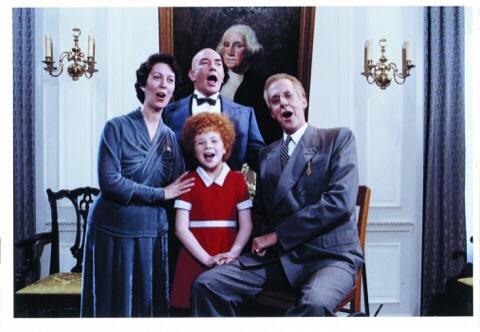 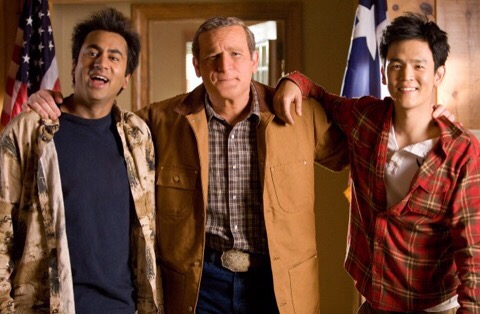 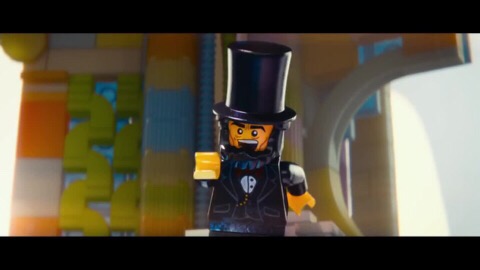 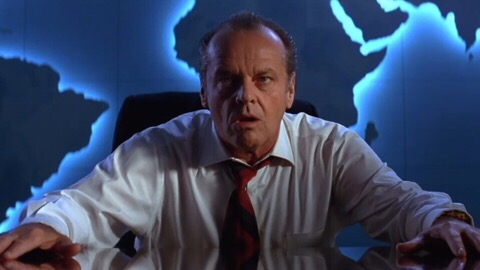 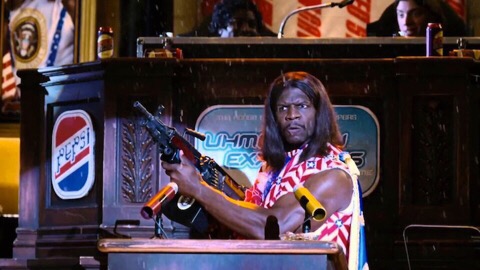 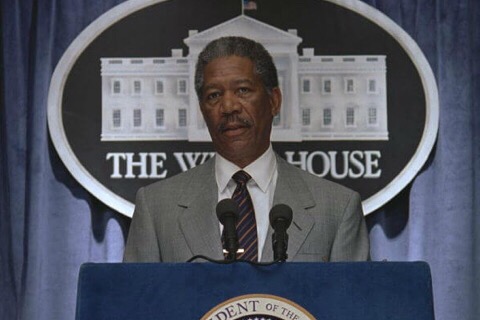 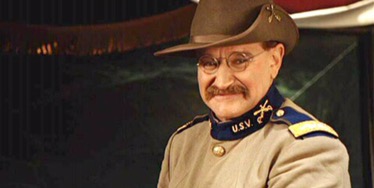 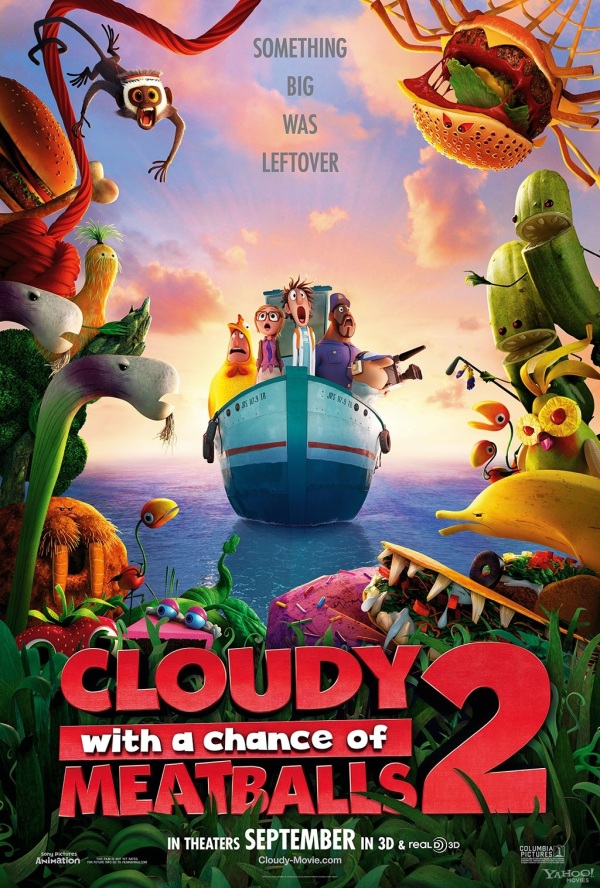 Plot Synopsis:
Flint Lockwood’s invention, the FLDSMDFR, has not been destroyed as previously believed and is now creating food/animal hybrids which are attacking those trying to clean up the island. The FLDSMDFR must be stopped before these dangerous foodimals take over the world. 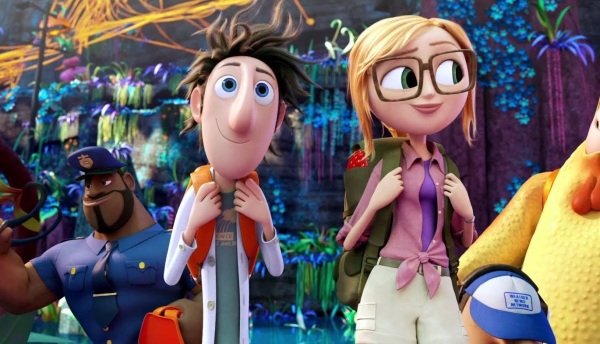 I would love to have some of the drugs the filmmakers were on when they made this movie. I mean, the first film was crazy enough but this one is bananimals.

I’ve sort of seen the first film a couple of times (I slept through most of it the second time). It’s okay. You certainly can’t say the story lacked originality! That’s definitely the case this time around as well. It continues immediately after the end of the previous film (I think. From what I remember). After the FLDSMDFR is destroyed (or so everyone thinks), an inventor (& the CEO of Live Corp) named Chester V arrives to clean up the island with a team of other scientists while Flint and his friends are sent to live in California where Flint takes a job at Live Corp.

I felt that this section of the film was a little overlong and I was a bit bored. The movie is very slow to begin with. Luckily, Chester V needs Flint to come back to the island after his team of scientists are attacked by cheespiders (You know! Giant cheeseburgers with spidery French fry legs!). Turns out the FLDSMDFR wasn’t actually destroyed and it’s now churning out these crazy food/animal hybrids (foodimals, FYI) that could take over the planet. And Chester V needs Flint’s help to shut his invention down before more foodimals are created! Dun dun DUUUUUNNNN! 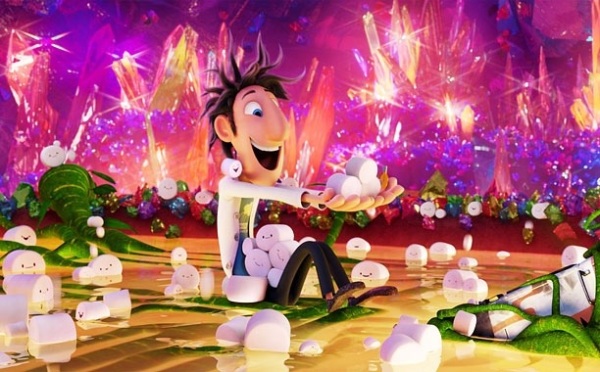 This is where the movie finally picks up and gets much better: When Flint & his friends come back to the island which is filled with all kinds of weird & wonderful foodimals. I was going to try to remember all their funny names for this review but, unfortunately, I’m old and have a terrible memory now. Let’s see… 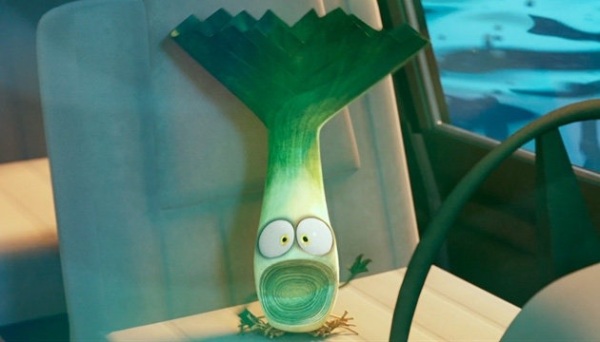 I remember the huge “tacodiles”. Tacodile Supreme, actually. Um, Shrimpanzees? Watermelophants? Mosquitoast? And, of course, the “leek in the boat!”. Haha! The pickles that Flint’s father befriends are pretty funny and the family of marshmallows is adorable. But NOTHING is cuter than the little strawberry Flint’s girlfriend names… “Berry”! SO FREAKING ADORABLE! Okay, Berry totally made the whole movie for me. I want to adopt Berry. Berry can come live with me and we’ll watch things like Strawberry Shortcake together. 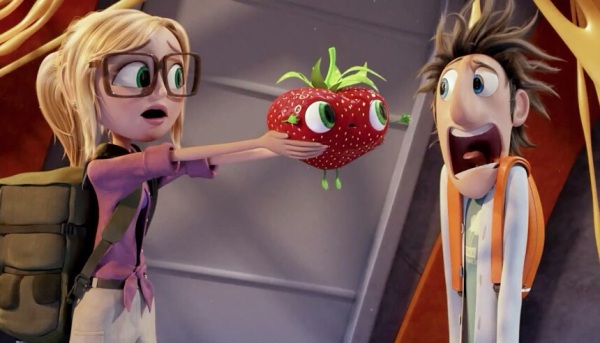 Really, I don’t know what else to say about this. It does have some funny moments but it’s all pretty mental. It’s nowhere near the level of the stuff we get from Pixar or Disney. The characters are all likeable enough but I’ve still not fully bought into any of them after two films in the way I did with Pixar characters like Sulley & Mike. It’s a fun enough film to sit through with your kids, though, and I like it more than the first one. Because Berry isn’t in the first one! Your kids will love it and you won’t hate it. 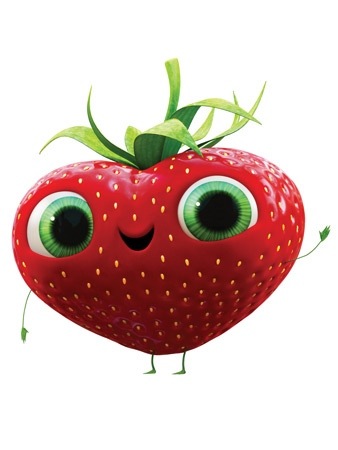