Plot Synopsis: (via Wikipedia)
The story follows a young mother who is left to raise two half-human half-wolf children, Ame and Yuki, after their werewolf father dies.

Here’s a list of all the Blind Spot films I watched this year from my least favorite to my favorite:

Wolf Children is the second Mamoru Hosoda film I’ve seen after watching Summer Wars as a 2016 Blind Spot choice (I’m watching these out of order – I really need to watch his film The Girl Who Leapt Through Time. It’ll be a 2018 Blind Spot choice). Summer Wars was fun & I loved the concept but it’s easy to see why Wolf Children seems to be Hosoda’s most critically acclaimed film so far. It’s a beautifully animated film with far stronger characters than most live-action films can manage these days. 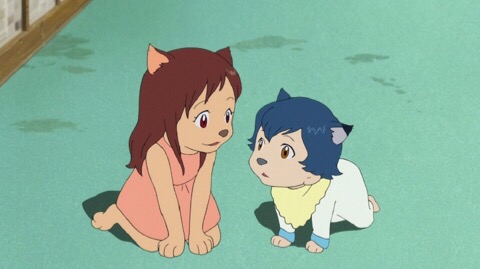 My Japanese anime experience is mostly limited to the Studio Ghibli stuff, Akira & Ghost In The Shell. The latter two are clearly more hardcore “grown-up” anime while half of the Studio Ghibli stuff is kid-friendly and half is aimed more at teenagers & up. Wolf Children is like the slighty more grown-up & coming-of-age Ghibli films (Spirited Away is the easiest comparison). It’s not as magically bizzare as the Hayao Miyazaki Ghiblis (what IS?!) but I have to admit that I liked it more than most of the non-Miyazaki Ghiblis. I’ll definitely be watching the rest of Hosoda’s biggest films but know that I’ve now seen the one considered his best. Oh, and FYI: I noticed that his 2015 film The Boy And The Beast is on Amazon Prime Video if you have that. I need to find the time to watch that.

As I said, I can see why Wolf Children has received so much praise. It’s beautiful to look at, especially the scenes set in the snowy woods. The wolf children themselves are absolutely adorable. I want some wolf babies! Okay, maybe not: I have to admit that the wolf/human sex scene was a little disturbing. I suppose teenage Twilight girls would probably like this film… Oh, shit. I’m not comparing this to Twilight! Sorry!!! This is nothing like Twilight!!!!

Human/Wolf sex aside, the love story is tastefully done and the movie is more about the story of the children as they grow up and try to fit in with the other human children in their community. I loved these two characters with their strong & very different personalities (shy & scared brother, bold & outgoing older sister) and the way that their personalities are affected by their experiences as they grow older. I do always love a good coming of age film and Wolf Children is a great addition to that genre. I’m very glad that I added this to my Blind Spot list and finally got around to watching it. There will definitely be some more anime in my 2018 Blind Spot list, which I’ll post in a couple of weeks.

See you tomorrow with my month-in-review post & next week for all my 2017 year-end lists! I think I keep this blog going only to be able to do the year-end lists. 😉 Love them! I’ll be posting: