Plot Synopsis: (via IMDB)
In a corporate-controlled future, an ultra-violent sport known as Rollerball represents the world, and one of its powerful athletes is out to defy those who want him out of the game. 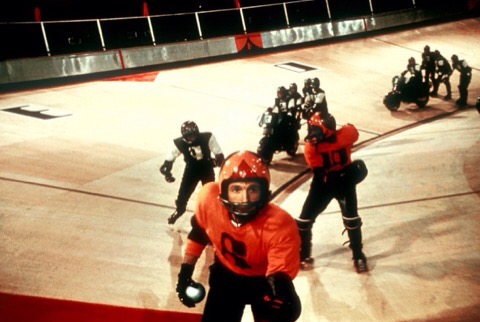 I’d been meaning to watch Rollerball for years. 70’s dystopian sci-fi is so very ME! Yet I’d never gotten around to watching this one for some reason (or THX 1138 – another one that’s been on my list for years). So, I had fairly high expectations. Well… Damn. I’m sorry if there are any fans of this film but Rollerball is, for the most part, a bit boring.

Some sci-fi films age well but this isn’t really one of them. Its dystopian view doesn’t seem as relevant now (we have FAR bigger worries these days!) and, my god – there’s nothing I love more than ugly 70’s hair & fashion but the people in this look SO 70s that it’s hard to suspend disbelief & think of this as actually being set in the future. Rollerball takes a fairly serious approach to the subject matter so does as least sometimes come across as more “gritty” than other cheesy-looking sci-fi from the same era, such as Logan’s Run (although I do like Logan’s Run… I preferred it to this). But the only scenes that really work here are the ones where the actual sport is being played. Unfortunately, whenever they leave the arena, the movie goes back to looking every bit its age & becomes a bit of a snoozefest with dodgy acting from most everyone other than James Caan, which is probably why it took me about four attempts to finish it. Hey! You do get a glimpse of a penis in a shower scene in the beginning, though. 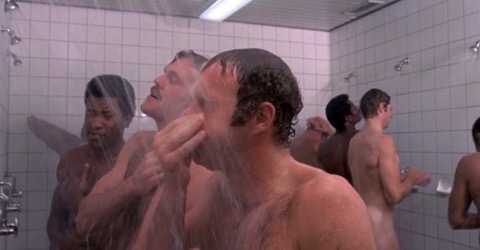 Speaking of penises, I gotta say that Rollerball certainly wouldn’t pass the Bechdel test. Being a woman who likes a lot of old movies (especially ones that most would consider “guy” movies), I’m used to that so I’m not saying Rollerball is really any more guilty of this than a lot of movies at that time. However, the female characters in Rollerball are nothing more than “pretty wives” for the players. From what I could gather, they’re “given” to the biggest Rollerball stars and, when Caan’s character is told he must retire, his “wife” is promised to someone else. But they give him a replacement woman – I’m not sure why as they want Caan out of the spotlight anyway. Is she his retirement gift? Is it because he needs a pretty face by his side when he makes his retirement announcement? I probably missed the point as I kept falling asleep when they weren’t playing Rollerball. They hint at the fact that he may have actually been in love with his “wife” but the movie fails to really explore this storyline. This movie happens to be set in 2018 so I’m glad women are a bit more than just “sports star whores” these days! Hey, that’s okay – just balance things out by watching the Drew Barrymore & Ellen Page movie Whip It after Rollerball. 😉 Yeah! Whip It! That movie rules. I want to be a roller derby chick. I’d be the old one like Juliette Lewis’s Iron Maven (I’d like to use that name as well!). I’m a wuss, though, so I probably wouldn’t last long.

Did I just compare Rollerball to Whip It?! Ha! Okay – Rollerball is really just super violent roller derby with motorcycles & a spiky ball but the main two films I thought of while watching it were two that I enjoyed a lot more: The Running Man & Death Race 2000. Rollerball is a better “film” than either of those but it kind of forgets to be fun or entertaining. Actually, that’s a little harsh… I’m going to wrap this up now & try to be more positive. In fact, I think this one may deserve two ratings.

I don’t think I’ve been entirely fair to Rollerball. I may enjoy something like Death Race 2000 more, which is also from 1975, but I’d have to admit that it also hasn’t aged well – it’s just less serious and more fun to watch in 2015. That’s down to personal taste, though, and plenty of people will prefer the far less cheesy Rollerball. I think it’s unfortunate that the non-sports scenes REALLY let the film down. While the players are in their Rollerball uniforms (which do have a cool iconic look) & beating the shit out of each other, the movie is enjoyable. I have a feeling that fans of this movie have nostalgic feelings about the sports scenes & have kind of blocked the rest from their minds. I don’t think I’ve done this before but I’m going to give Rollerball my current rating as well as the rating I may have given it if I’d been old enough to watch it back in 1975. 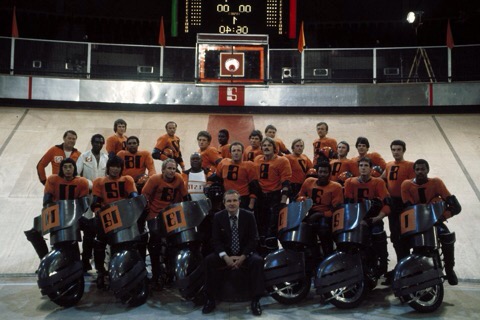