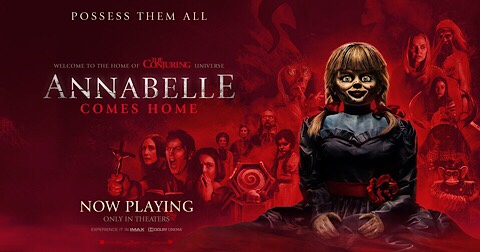 Plot Synopsis: (via IMDb)
While babysitting the daughter of Ed and Lorraine Warren, a teenager and her friend unknowingly awaken an evil spirit trapped in a doll.

I’m not sure why but I’ve watched all the Conjuring Universe movies. I thought the first Conjuring film was very good but the rest of the films have mostly been rubbish. The Annabelle movies have been the worst and I hated the second film. Well, I’m happy to say that I think Annabelle Comes Home is at least far better than the first two Annabelle films. I still didn’t love it but actually did quite enjoy it. And I’m in a rare good mood so I’m going to give it a decent rating. Here’s my Conjuring Universe movie rankings & links to my other reviews:

I was kind of tough on The Nun. It wasn’t that bad. And The Conjuring 2 is probably much better than Annabelle Comes Home but I just can’t remember much of that one at this point…

I’m not sure if people are liking this movie or not but it’s certainly the “least evil” of the Annabelle movies, which may not please Conjuring Universe fans. I believe all these movies are probably rated 15 in the UK but was curious what the American rating was for this one so I looked it up. It was far more tame than the others so I’m surprised it’s still rated R?? It really feels like a PG-13 film, which I know not all horror fans appreciate but I have no problem with. Hell, the movie almost gave me more of a Goosebumps feel (not helped by the fact that the babysitter in this was in Goosebumps 2). 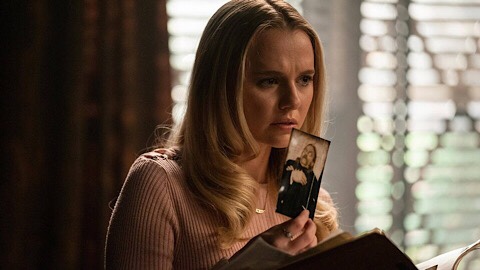 I think that’s why I had fun with this one, though. I liked that the focus was on a couple of teenage girls babysitting a younger girl (played by Mckenna Grace). I also liked the predictable but simple story. Slight spoiler but the doll awakens various evil spirits which terrorize each girl in a way that also reminded me of the plot in the first Goosebumps film (I admit it – I liked the Goosebumps movie). Most importantly, though, the three girls are likeable. Too many cheesy horror movies have hateful characters, which I never understand. I want to like the characters if I’m going to care about their fate.

For fans of Ed & Lorraine Warren, I’m sorry to say that they’re barely in this. That’s a shame but they’ve had bigger roles in some of the other films so I was okay with them being in this one less. I do find it fascinating that these stories are (loosely) based on their real life paranormal investigations. I didn’t realize that the Amityville haunting was one of their cases as well. I love that paranormal shit! I know these movies are massively exaggerated, of course, but supernatural horror is my favorite type and I usually enjoy even the many bad movies in this genre. Annabelle Comes Home isn’t bad, though. It’s fine but it’s not exactly going to blow anyone away and it doesn’t do anything we haven’t seen before (although the bit with the old television set was fairly inventive). I also liked that they included a nod to the real-life Annabelle doll, which was a far less freaky-looking Raggedy Ann doll.

Speaking of creepy dolls, I’ve always been a fan of scary doll movies. Unfortunately, I don’t think the Annabelle movies are the best in this sub genre and Annabelle herself doesn’t have much to do in these films. I realize it’s better than movies where you’re actually seeing the dolls walking around & stuff as that’s super cheesy… Anyway, I of course made a list of My Top Ten Creepy Dolls In Movies & Television. I’ll forever be haunted by an old Alfred Hitchcock creepy doll episode…