Plot Synopsis: (via IMDb)
A family is forced to live in silence while hiding from creatures that hunt by sound.

I was really looking forward to this movie well before all the hype. I liked the sound (ha!) of the plot synopsis as it seemed like an original idea plus I really like Emily Blunt so that helped as well. And Emily Blunt is a proper actress – she wouldn’t be in a BAD horror movie! Well, okay – Wind Chill wasn’t the greatest (although I kind of liked it but that’s probably only because of Blunt). Anyway, good modern horror movies are extremely hard to find and I’m very picky when it comes to this genre. There’s been an improvement, however, in the past few years with things such as It Follows and The Babadook and I’m happy to say that A Quiet Place continues this trend of original, well-acted, and smart horror films. 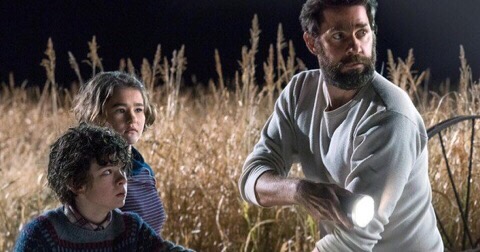 First of all, this movie does what I think is the most important thing in all movies, really, but is often ignored in the horror genre: it takes time setting up and making you care about the characters. Just like with the It adaptation last year (another chance to mention It – I loved that film). I’ll stay completely spoiler free in this review but I think it’s known that A Quiet Place focuses on one family as they struggle to survive in complete silence. It’s obvious that the parents love each other. How sweet – Blunt & Krasinski may actually have a loving real-life Hollywood marriage. I hope so! I want another Paul Newman & Joanne Woodward Hollywood love story. I’d like to believe the love is real because it comes across that way in the film. They were both great and the kids also did really well. You know the parents will do whatever it takes to protect their family.

By the way – Yes, it was really was hard to eat popcorn in this movie. Crunch crunch crunch! Hats off to those in my cinema – everyone actually stayed really quiet for this film. Shocking! You always have some asshole ruining things but I think, as the film was so quiet, everyone was too self-conscious to make any noise. Now if we could just get everyone to not distract the audience with their BRIGHT FUCKING PHONE SCREENS! What sort of movie could make people not want to look at their phones, I wonder? Hmm…. (Wasn’t an issue for me in this film since I was in the front row) 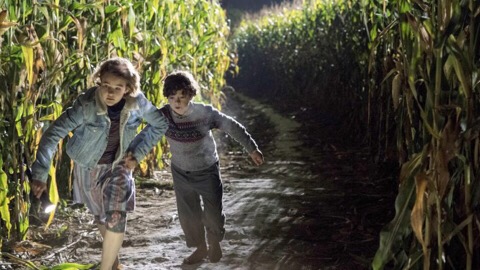 What else can I say? You’ve already seen all the reviews raving over this & heard all the hype. This is a brilliantly acted and thoroughly effective horror film. It didn’t scare me but no movies ever really do so maybe that’s just me (I’ve watched too many movies!). But I was very tense as I wanted this loving family to survive and, for a change, I wasn’t able to predict what would happen (unlike with the majority of cliché modern horrors). I’m happy to say that A Quiet Place lives up to all the hype. I’m loving this new trend of modern horror movies actually being damn good films. Can the Academy please recognize this one with some Oscar nominations next year? It’s time to start giving these films more credit when it’s deserved.