Based on Annihilation by Jeff VanderMeer

Plot Synopsis: (via Wikipedia)
Annihilation follows a group of military scientists who enter “The Shimmer”, a mysterious quarantined zone full of mutating landscapes and creatures.

I’m really glad this got rave reviews. I love a good sci-fi film. It’s great that there seems to have been a resurgence of hard sci-fi in the past few years with things such as Arrival, Blade Runner 2049, and Alex Garland’s directorial debut Ex Machina. However, I seem to be one of the very few who found Annihilation a bit of a disappointment.

I’m definitely a Garland fan. Besides Ex Machina, which I thought was absolutely brilliant, he wrote the screenplays for 28 Days Later…., Sunshine, and Dredd. I love all those, so maybe that’s why Annihilation was disappointing? That may be part of it but I think the biggest problem was that I read the book first (by Jeff VanderMeer) and I liked it a lot. 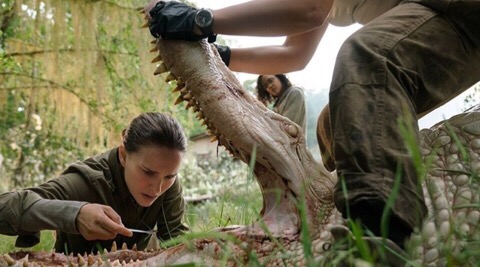 The movie follows the book quite closely to begin with but then goes off the rails. I do wonder how I’d feel if I’d not read the book? I’d probably have loved how utterly bizarre the film becomes at the end (I love weird shit). But you know what? The book is even more crazy. I really wanted to review the book as I enjoyed it so much but never did as I had no clue how to describe it. The novel perfectly conveyed this overall eerie feeling that stayed with me long after reading it. Unfortunately, my favorite parts (and the creepiest) were completely left out of the film. I can kind of understand why as it would’ve been hard to translate to film without it looking cheesy, but… Shit. I was so looking forward to seeing how those parts would be handled. In the book, there was a mysterious underground structure that seemed somehow linked to the lighthouse but was far more disturbing. The film kind of combined the two places a little bit but I still feel cheated.

Okay, I’ll try to focus on the positive now because I do still think this is a good sci-fi movie even though it doesn’t quite live up to the novel. I loved the look of this film and the gorgeous “Shimmer” they enter. The world inside The Shimmer looked as strange & beautful as how I’d imagined it. The ending involving the lighthouse was enjoyable even though it was completely different to what I was expecting. And, yes, I liked it being a group of women but this is the same as in the book anyway. To be honest, I’m giving less and less of a shit about who stars in a film as long as the story is good and the acting doesn’t totally suck.

The characters aren’t that well developed but I can’t complain as that’s the same in the book as well. We actually get far more backstory involving Portman’s hubby, played by Oscar Isaac, and the rest of the women than we did in the book. The book is truly only about its story, which was fine since it’s a strong one. Adding more to the characters for the film was a smart move as I think connecting with the characters is more necessary when it comes to film. I didn’t think any of the acting really stood out, though. Tessa Thompson was possibly the strongest but it’s not a huge role. I love Jennifer Jason Leigh but she’s not much different from usual in this. Sadly, I’d probably say the same of Portman. This was another thing a little disappointing as I thought the acting was so strong in Ex Machina (especially Vikander). I’m not saying anyone did a bad job, though. They’re all good actors but are just a bit MEH in this. And I found the final predictable scene in this a little too cheesy and “Hollywood” after watching this great bizarre story that can’t be easily explained. 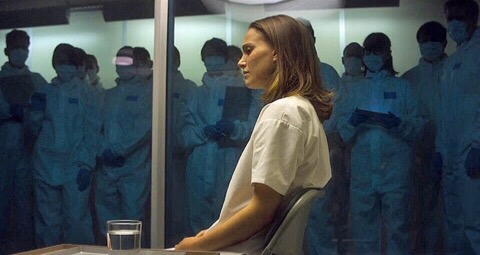 So. I dunno. Maybe I should stop trying to read every single book before its film adaptation! My true love is film and I know this is a case where I definitely liked the film less than I would’ve if I hadn’t read the novel. However, it’s a damn good book so I’m still glad I read it and I highly recommend it to hard sci-fi fans. I guess I better read the rest of the Southern Reach Trilogy now (Annihilation is Book 1). I was waiting to see the film before continuing but now I wish I’d finished all three first. I can say I’m still an Alex Garland fan, though. I eagerly await his next project and hope he continues in this genre.