Today’s IMDB Top 250 Guest Review comes from Liam of Liam Does Film. Thanks for joining in, Liam! 🙂 Now let’s see what he has to say about Donnie Darko, IMDB rank 176 out of 250…

There are still some movies up for grabs if anyone wants to do a guest IMDB Top 250 review. You can find the list of remaining films HERE. See the full list & links to all the reviews that have already been done HERE. I’ve stopped receiving so many guest reviews now so if you send yours soon, it should post soon. I only have enough for the next month. 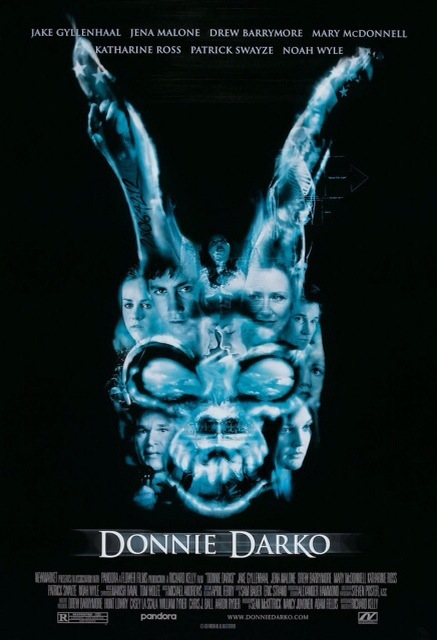 Those who have said bad things about this film have just not understood it. Donnie Darko is that film where you’ll find yourself watching it over and over looking for the explanation; on the way you will then discover just how good this film is and why it’s rated as one of the best of all time, deservedly being on IMBD’s top 250, among many critics, including myself, personal favourites. It has an amazing cast; a young Jake Gyllenhaal plays the character of Donnie, after he will star in award winning films such as Brokeback Mountain and The Day After Tomorrow. Future Batman star Maggie Gyllenhaal, Jake’s actual sister, plays Elizabeth Darko whilst we also get to see the well-known Patrick Swayze alongside Drew Barrymore. However it isn’t just the cast, a well-written story which dives into the world of complexity and defines the phrase thought-provoking, makes Donnie Darko hard to forget, and for me it is simply brilliant in every aspect and sense of the word.

Donnie Darko (Jake Gyllenhaal), is a far from ordinary teenager, suffering from hallucinations Donnie starts to be visited by a demonic six foot rabbit named Frank, who manipulates him to commit a series of crimes, however Frank’s arrival into Donnie’s life is more important than first thought. At the dinner table his sister Elizabeth (Maggie Gyllenhaal) tells his parents (Mary McDonell, Holmes Osbourne) that he hasn’t been taking his medication, however later that night due to these visions Donnie escapes death as a 747 Jet engine crashes and destroys his bedroom whilst he’s on a midnight trip with Frank. Frank tells him that the world is going to end in “28 days, 6 hours, 42 minutes and 12 seconds”, The mystery grows as the jet engine is unknown by the FBI creating the question of where exactly did it come from? All that is known is that Donnie’s escape from death and Frank’s appearance are two supernatural events that have crossed and are somehow linked, and as Donnie is enlightened to a whole new way of thinking, he then realises the truth behind Frank’s words.

The story fuels from a “countdown” method, as each day passes we get closer to a predicted doomsday. However it is what the film gives us in those days that are great, not only are a string of relationships and subplots introduced but a series of clues in which just like Donnie, we have to piece together. As stories develop our characters all become very likable, something that Donnie Darko benefits from greatly, Donnie himself is loveable; lost, bold and witty, whilst the same aspects are all shared by his sister Elizabeth, newly found girlfriend Gretchen (Jena Malone) and his English teacher played by the seemingly ageless Drew Barrymore. The film keeps you on the edge, with a mixture of unexpected, dark plots balanced by strangely comedic moments. Richard Kelly for me deserves a huge amount of credit, as Donnie Darko holds such an amazing story.

Jake Gyllenhaal soon became one of my favourite actors after his role as Donnie; it is flawless, creating and portraying one of the most memorable teen characters for me since Ferris Bueller. There is something very likable but at the same time relatable with his character and Jake brings it to life superbly. The rest of the cast are great, Jena Malone portrays Gretchen well with it seeming very natural, whilst also providing one of the memorable quotes and scenes, “you’re weird … that was a compliment”. Drew Barrymore as Donnie’s English teacher is great, she provides a laughable aspect, whilst Patrick Swayze portrays the not so lovable Jim Cunningham well as you would expect of such talent, rounding off a truly remarkable ensemble; which even includes a hidden Seth Rogen.

This film does well to provide everything from comedy moments to suspense, thrills and gasps fulfilling so many aspects with even the soundtrack becoming an iconic element. Maybe when watched a few times you seem to pick up on Kelly’s details, and the soundtrack is brilliant as each song and piece of score predicts what’s happening next or compliments the events on the screen. The songs of choice all seem very fitting too, with Mad World becoming nostalgic after time.

Donnie Darko should be known for a long time to come, and hopefully it will be as Richard Kelly’s first film shines in every way it could have. A brilliant story, portrayed by a great acting ensemble, whilst everything else fitting perfectly around the two makes Donnie Darko in my eyes flawless, and my favourite film of all time. Entertaining, thrilling and funny, complex and thought-provoking are some of the things this film can be described as, but overall it is a master-piece which will be sure to be your favourite, or your new obsessive guilty pleasure, deservedly being rated as one of the all-time greats. 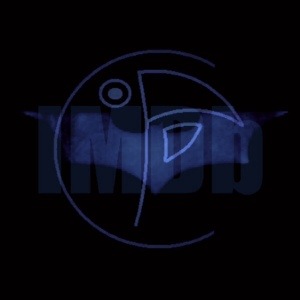 Today’s IMDB Top 250 Guest Review comes from Luke of Oracle Of Film. He’s chosen to review Christopher Nolan’s entire Batman trilogy. He already reviewed Batman Begins last week (review HERE) & I’ll be posting his review for The Dark Knight Rises this same time next Thursday. Thank you for doing these, Luke! 🙂 Now let’s see what he has to say about The Dark Knight, IMDB rank 7 out of 250…

THE DARK KNIGHT: THE REVIEW

When I first watched the Dark Knight, I was disappointed. In my opinion, Nolan had delved too far into his realistic vision and had lost the essence of Batman. The battles between Batman and the mob felt less like a superhero action and more like a political thriller with a kick (The Dark Knight has been compared to Michael Mann’s ‘Heat’). I felt that Batman had lost that Gothic appeal and the charm that made originally fall in love with the character was missing. It didn’t helped that this movie was over-hyped to be one of the greatest superhe… no, movies of all time.

Then I saw the bigger picture. The Dark Knight is one of those movies that somehow gets better with every watch. You notice certain details and elements that you missed before. There are so many secrets tucked away inside the Dark Knight and I am sure I will learn of quite a few more as of yet. While I still think it is the weakest of the three movies (it suffers from not being the origin or the finale of the trilogy), it is still a terrific piece of cinematic art, with political messages and comic book references sprinkled all over this masterpiece. Nolan tells an interesting story, where it is suggested that Batman is slowly becoming the villain, as Bruce Wayne gets lost in his war on crime. The actual story is one full of twists and turns, throwing unexpected shocks at us. Characters are killed off in a heartbeat, arcs are completed with agonising horror and we are given one of the most complex superhero movie villains of all time, and probably quite a while to come yet. The one beat that falls short is the twist of Harvey Dent. As a comic book fan, I knew where that line of story was going, and I felt it would have been much more powerful, if they gave the District Attorney a new name. Sure, it would have annoyed the fans, but imagine if that final reveal was totally out of the blue. It would have been amazing.

And what a script! I didn’t realise this until recently, but this movie is full of quotable lines. Sure, we all remember the popular ones, like ‘Why so Serious?’ and ‘I am not the hero Gotham needs, but the hero it deserves!’, but there are so many more that slip under the radar. Almost every line given to the Joker could easily be the quote of the year “Do you know how I got these scars?” “Oooh, you’ve got a bit of fight in you, I like that!” But the dialogue is so sharp that Christian Bale’s Batman also has a just-as-perfect line to follow it up with. While people remember the Dark Knight trilogy for its visual impression, the awe-inspiring soundtrack and the outstanding performances from every actor involved, I shall always praise the Dark Knight trilogy for one of the finest group of scripts I have ever witnessed. It is truly incredible work from David S. Goyer.

The Dark Knight also feels like it is engaging the audience at several times. The best thing about the Joker is that his social tests give Nolan the opportunity to throw several moral dilemmas at us. The Joker puts a group of convicts and a group of civilians in two separate boats and gives themselves the option of blowing each over up. We get the time old superhero dilemma of which hostage should be saved. The Joker is the life of this movie and Heath Ledger’s amazingly outside-the-box performance really makes this a key part of the trilogy. While I am still a more comic book based Joker fan, it was a refreshing change and suited Nolan’s realistic vision far better. Heath Ledger remains unpredictable right until the end (which ironically is quite difficult with the Joker, as if anything’s possible, it is harder to shock with him), meaning that we are totally invested in the character throughout the entire film. Despite public outcry at Ledger’s casting, Nolan knows he is onto something good and gives the actor as much space as he needs to have us in the palm of his hands. Some of the most memorable scenes are ones where Heath Ledger is allowed a sinister monologue, the hairs on the back of our necks standing up on edge, attention caught by the clown.

However, to say Ledger steals the show would be suggesting that everyone else dropped the ball. In truth, almost everyone else meets the late Heath Ledger, blow for blow. Christian Bale is far more comfortable as the Bat this time around, channelling the aggression and frustration that Batman works so hard to bury. Gary Oldman feels much more useful to the plot, this time around, and it is easy to overlook the fact that he is probably one of the best actors Nolan has at his disposal. Christopher Nolan also has a habit of casting actors I think little of and making me change my mind. Aaron Eckhart is at his best here, as Harvey Dent, the District Attorney determined to make a change, even with the odds stacked against him. Meanwhile, Maggie Gyllenhaal doesn’t quite sway me, but an interesting character arc means that we are still totally behind her character and interested to see what Nolan has up his sleeve. A perfect ensemble of actors.

Final Verdict: Nolan goes from strength to strength, making this Batman more thoughtful than before. It also boasts some of the finest acting ensembles in quite a while.